How to get motion vector blur in Blender eeVee


This is a bit of a dirty workround and was inspired by YOGYOG's alpha tutorials for eeVee.


This workround works by rendering in both Cycles and eeVee and using the vector and depth passes from cycles in the compositor to add motion blur to the eeVee render.


This may sound like a long process but if you turn everything down to the minimum in Cycles the cycles part of the render does not take too long. (though if anyone knows how to make it faster I'd be very glad to hear from you.


Having created your scene in eeVee  you need to duplicate it

and use 'Link Objects'

We will now have two scenes in the Outliner, which we can rename 'eeVee' and 'Cycles'


Select the 'Cycles' scene and we need to make the cycles pass as fast as possible and include the Vector Pass. 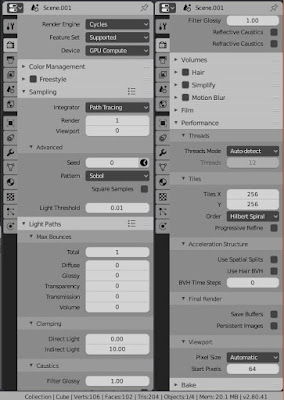 Turn everything down to as low as possible even if you don't understand what it does to make Cycles render a quick as possible. 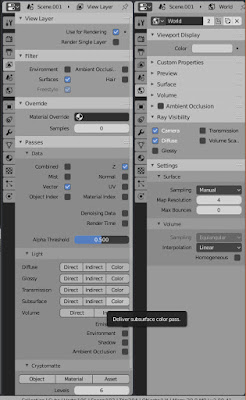 Select the Vector pass and the depth pass and turn everything else off or low.


In the Compositor, using render layers, select the Image from the eeVee scene and the Depth and Vector from the into the Vector Blur node. 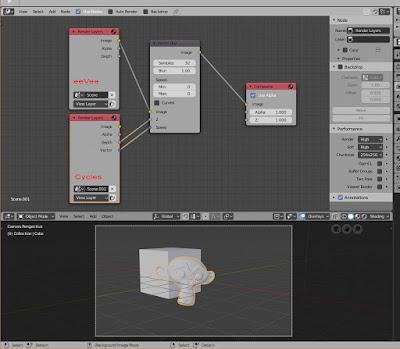 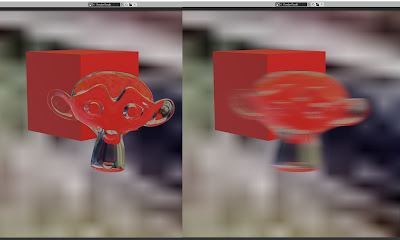 1) you must have the Cycles scene selected in Blender or you will just get the eeVee render without motion blur for some reason. (I guess the cycles doesn't render)

2) Blender crashes if you try to change the dimensions of one of the scenes and try and render it.


Posted by Laurence Weedy at 08:15 No comments:

I'm very proud to say I did the CG for this impressive and intriguing installation. I used the Blender eeVee engine while it was still in alpha and had remarkably few problems which is a testament to the fine work of the developers. If you happen to be in Copenhagen between 19th January and 12th March  2019 then do go and see this latest work by Søren Thilo Funder! 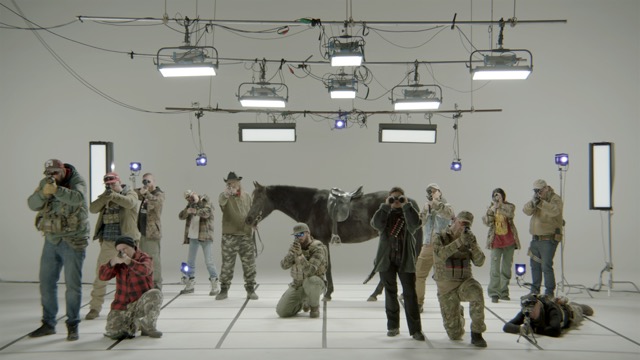 Link to Den Frie Gallery
Posted by Laurence Weedy at 06:20 No comments: