Having got the SW1000XG working in its new fanless case it seemed a shame that I could not make use of the digital audio out the card offers. Computers used to offer SPDIF in but it seems to have gone out of fashion. A cursory search on the web revealed only very expensive solutions until I hit upon a cheap device containing a CM6206 chip. A search on eBay for CM6206 in the description revealed a number of devices – cheap USB sound cards which included SPDIF in. I bought one for £8.79. It can only do 2 channel audio through SPDIF but that’s fine.

As the SPDIF input was optical I also bought a coax to optical converter... or so I thought.. In fact I bought an optical to coax converter by mistake. 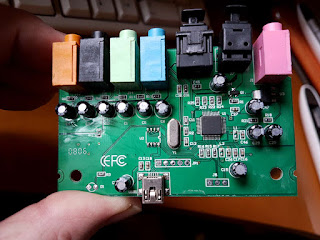 Not to be defeated I was inspired by this article where someone simply connected a red LED to the coaxial output via a resistor an shoved it in the optical in.

I did not have an LED! But as I was not using the SPDIF optical out on the USB device I though I might be able to hijack the transmitting LED. I cut the track and connected the Coax to the input... It didn’t work..

SO then I thought I’d connect the coax in place of the optical input. I unsoldered the optical receiver... unfortunately destroying it in the process.. but the amazing thing was... 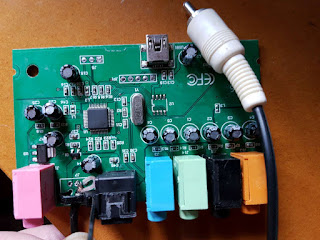 I won’t go into how I managed to mangle the front cover but needless to say patience was not the watch word of this project.. 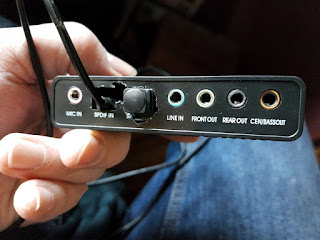 So –Initially it worked. I recorded the output of the SW1000XG into Audacity via the SPDIF interface.. and fine... no problems at all.

I thought I’d try it with a DAW.. Loads of problems, loads of distortion.
It seems it does not like ASIO drivers. Best results in terms of latency came from using WASAPI drivers but there was some glitching. Normal windows drivers worked fine but the latency was terrible.

Finally a word of warning. The USB audio box is a bit temperamental. If you put the usb out the computer will Blue Screen of Death. The USB box can get locked up and rebooting the computer wont fix it – you have to depower the USB box.

PS. You can and an LED to the box to show it's on. There is a place on the circuit board here 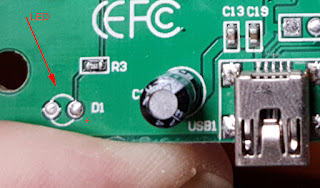