Some of the newer cheap Chinese tablets available are based on the Via WonderMedia chipset and in particular the WM8850. They are recognizable because they tend to come in this case.

It comes with Android 4.1.1 and a kind of Windows Metro interface which actually isn't that bad.

I had done some research into ROMS for it and there seems to be one, Uberoid available at www.Techknow.me. This is a ROM for a lot of chinese tablets. Using its tools I determined that mine was a Eken_MID7_W70_GSL1680_Z7Z67-030A and I also determine that the wi-fi did not seem to work so I decided not to bother.

I bought it for a friend's kid and bought it well ahead of his birthday to make sure it was OK (I had had bad experience with other cheap Chinese tablets).

Its not bad at all and far better than than the A13 tablets which I had tried before. One problem is there are no accessories made for it that I can find ( don't believe the dimensions advertised anywhere - it is about the same length and depth as a Galaxy Tab to but not as wide, and I modified a case out of one for this tablet.)

The kid loved it but the battery life was very poor, he ended up using it plugged into the charger and then the charger connector (2.5mm) bent and so I bought a new one with a longer lead. Also the screen scuff really quickly and I found that screen protectors for the old Kindle Fire worked very well. Also, he tended to use it without the case and then one fateful day, it was in his bag, the bag hit a wall and when we took it out the screen was smashed. 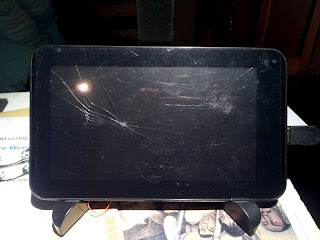 So I thought I would try and fix and enhance it before shelling out another £50 for a new one.

I MADE THESE MODIFICATIONS AND REPAIRS AT MY OWN RISK AND TAKE NO RESPONSIBILITY FOR ANY PROBLEMS YOU HAVE IF YOU TRY IT YOURSELF. YOUR TABLET MAY BE DIFFERENT SO DO YOUR OWN RESEARCH.

There is no Rom manager or recovery avaliable for these tablets and I could not find a download of the factory Rom which I knew was correct. There seemed to be a lot of people with bricked tablets out there from tampering. 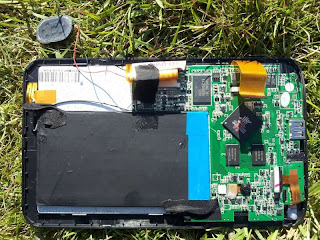 Anyway as I was replacing the screen I thought I would do the battery as well. The battery it came with was suppose to be a 2800mAh/3.7V Lithium - but it wasn't. On removing it it is one third of an iPad 2 battery also known as a Samsung PGF2865B3A which is 2310mAh. Also the battery seemed very spongy in use: it would discharge very quickly and then the battery level would creep up again afterwards.. I began to wonder if it was a genuine Samsung.

The Samsung battery is only 2.8mm thick but there seemed to be a bit of extra space in the case so I searched eBay for a bigger one that would fit. I bought what was described as 3.7V 3500mAh 4358107 lithium Battery Rechargeable Polymer Li-Po For Tablet PC from the seller bestuonline . Its dimensions are  107mm(L) * 58mm(W) * 4.3mm(H). It came fairly quickly and it was an easy job to unsolder the old one and put in the new one. * See end - battery did not stay good for long... :(

The difference was unbelievable. After half an hour of youtube and angrybirds which would have reduced the old battery to about 30% the new one dropped steadily to 80%.

Very pleased but not actually tried closing the case with the new battery yet.. I'm still waiting for the screen,

It is actually the Digitizer that has gone, not the LCD and I managed to find what I hope is the right one from DHGate.com . It was just over £12 with postage and is still somewhere on its way to me. Item - Cheap Front Touch Screen Glass Digitizer Replacement for WM8850 - item # 160990373
http://www.dhgate.com/product/cheap-front-touch-screen-glass-digitizer/160990373.html#s1-1-1|3597684784
IT MAY NOT BE THE RIGHT MODEL FOR YOU SO DO YOUR RESEARCH - DO NOT BLAME ME IF ITS WRONG

From what I have seen, you have to be VERY careful with digitizers, they tend to be the thing that doesn't work propery on cheap tablets and if you scuff the delicate side, you've ruined it.

Here is the inside view of the removed digitiser for those that are interested. There is what looks like a part number / date Y7Y001/20121229. 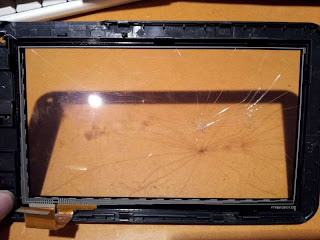 Now waiting for the new digitizer to arrive.

The new Digitizer has arrived! Just under two weeks from china, looks like its the correct model, will let you know.

I used this video on Youtube to guide me. It is for a different tablet but the principles are the same.


The touchscreen had to be removed from the bezil and the new touchscreen stuck in - it all took about 15 minutes.

Put it all back together and it works!

And whats more the new super battery fits as well.

A successful venture that saved £40 and improved the battery life from miserable to reasonable!
UPDATE!!! A month later and the new battery caused loads of problems. Seemed fine at first then suddenly would looks all charge when you weren't looking. Have put the old battery back in.