Updated: Computers for the elderly - Windows 8 for the silver surfers

My mother had been moaning for sometime that she found emailing (the only thing she really does on a computer) frustrating. I had set up a Gmail account for her and thought the web interface would be sufficient - not so. Not only was the web interface confusing but windows 7 was confusing too, with its may pop messages that were meaningless to her.

Then I had a light bulb moment. Could the Windows 8 Metro interface, the one I had berated because of its lack of functionality, be good for an elderly person for exactly that reason. I determined to spend £25 and find out.

Installing Windows 8 was easy, after remarkably few checkboxes it sat downloading and installing for an hour or so without human intervention. I chose only to keep personal files as there really was nothing else to keep. Meanwhile I forwarded her Gmail account to a new hotmail account. Hotmail forced me to use a more complicated password :/

Windows 8, once installed, sets you up for a windows live account, sign in with your hotmail etc. This is the first Windows 8 oddity as it only signs you into hotmail, nothing else. I wanted the computer to boot straight into the start screen, no logging in, and that meant changing the account to a local account. (many guides on the internet) and changing it so you don't have to log in. Weirdly you still seem to be automatically logged in to Hotmail (which I wanted) and there appears to be no difference with the other type of account. Oh well, Microsoft moves in mysterious ways.

I was able to organise the start menu; removing all the 'trending' rubbish and travel stuff, and was able to replace them with tiles which were shortcuts to sites she might like. One really annoying thing is the 'Live Tile' feature which changes pictures in the tiles every few seconds. You can turn it on or off, but you can not change the speed of refresh and after about 5 minutes it becomes intolerable so you switch them all off and the screen looks a little less glitzy.

Another problem you can encounter is if you install any software using the desktop. You end up with a pletherer of icons for programmes users were not meant to see like configuration programmes. There seems to be no process for deciding what would be in the start menu like there was in earlier windows. You have to go and remove them all. 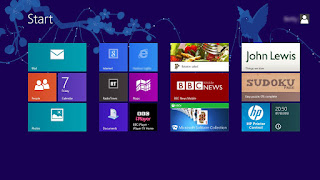 Anyway here is my Start screen with just the things she is going to use and a few treats. Now we enter the testing phase. I think she will find this start screen comprehensible and welcoming.. Who knows, I shall report back.

Reporting back
1) you can not have a battery indicator on the start screen (it is a laptop) only on the desktop.
2) no clock.. I tries a clock app and it only kind of worked.

Day 1
Not good. My mother thought it was confusing which I thought was unfair considering there couldn't be much less on the screen.
First problem was there is no wifi notification (infact I think no notifications at all on the start screen). I forgot i hadn't set it up for her wifi and there was nothing to tell me I hadn't. Only found out after the mail did not respond. Not a great start.
One of the tiles was an internet short cut to her favourite cinema. When she went to use it it was hijacked my microsoft and asked he to log into her windows live account. Why!? we were alreadly logged in to receive mail and who cares anyway. That was the second bad start.
We'll do more another day.

Day2 (which is some days after day one)
She was still a bit confused but it was better. I think the complete lack of anything on the screen except for the essentials is a bonus. The inbox confused her even though it works the same way as gmail inbox. Oh well.
We both felt that the text was a bit small (considering the screen was so empty), but as per Windows 7, I was amazed at how little control you have over the font size. I was able to increase it by 125% using DPI settings which was better. Also made the cursor and mouse larger and inverted. You can change the size of the text you are typing by right clicking on the message but we're trying to avoid right clicking because she's a maniac with a mouse.
Internet Explorer shortcuts still default to Microsoft the first time you use them from the Start Screen. Have not found a way round this which is really annoying for me and confusing for my Mum.

But she did admit, guardedly, that maybe it was a bit easier. time will tell.

Day 3
An enormous purpley blue stripe appeared across the screen which said 'this computer will restart in 15 minutes'.... thanks