I think that 2.5a2 isn't stable enough for me to work with yet but it does have some very desirable features over 2.49 that are tempting me in that direction. So here is a direct comparason while trying to do the same thing on both:

Oh well, in for a penny 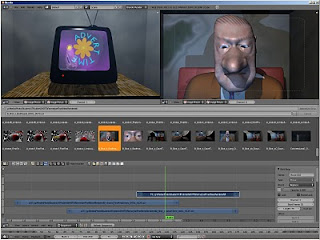 , in for a pound, I think its time to reedit my movie in Blender and see how it goes. My experiences of using the 2.5a2 version is that it crashes a lot so I think I'll stick with 2.49 to maintain my sanity.

Mind you I am very pleased with this layout I did this evening. One preview can look at the final output while another can look at a specified channel. Drag and Drop from the file browser. Kind of gives you a Bin and a triming window.
Posted by Laurence Weedy at 07:42 No comments:

Practical Video Editing with the VSE

An easy second post. Read this tutorial
This is the first really usable tutorial for video editting I've found. Definately download the 'Video Editing Preset' blend file. Suddenly I feel the VSE could actually be easy to use.

(http://indiworks.wordpress.com/2009/01/21/editing-with-blender-ubuntu-screenshots-workflow-from-my-notic-nastic-live-clip/ if the link doesn't work)
Posted by Laurence Weedy at 13:25 No comments: